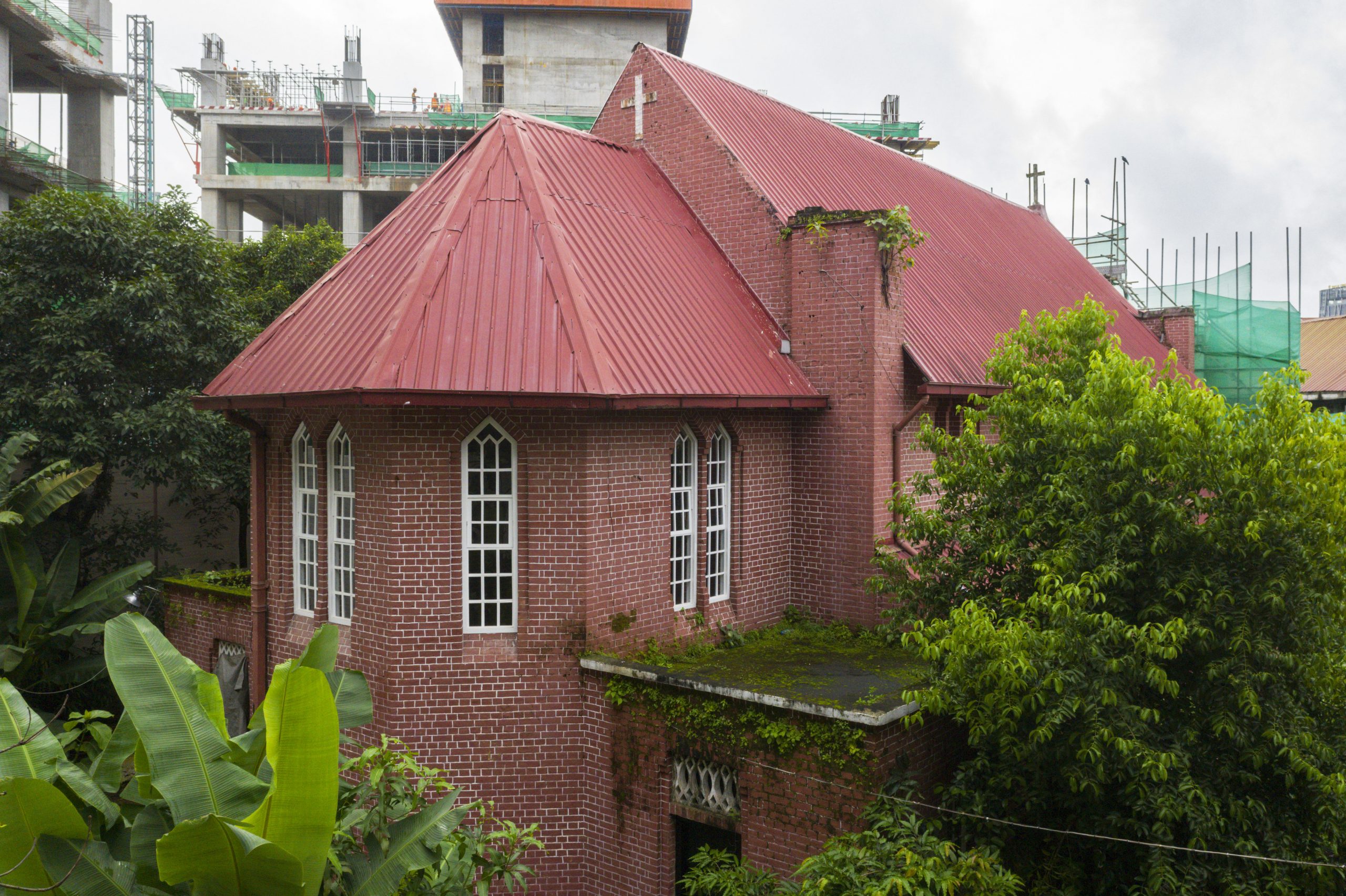 Tucked away between Yangon’s bustling Bogyoke Market and the busy project site for Yoma Central sits St. Gabriel’s Church, a quaint little church and parsonage whose construction predates even the market itself. Sandy Linn, the current technical coordinator of the church renovation project, said, “I never even noticed the church before the restoration started, even though I have lived downtown in Pabedan all my life. I had no idea there was a tiny church, a peaceful oasis, behind the busy Bogyoke Zay.”

Sometime in 1889, a small timber church building was erected east of Yangon’s iconic Holy Trinity Cathedral and next to the Burma Railways Office. As was typical in Burma at the time, there was an affiliated high school located on the property of the church. When the Municipal Corporation of Rangoon decided to move a market to the site of the school, the church agreed to sell part of the plot. Scott Market was eventually built on part of the property and completed in 1925. When the market opened in 1926, it no doubt brought vibrant commercial activity to a part of the city that was then mainly occupied by institutions. In 1935, the original timber structure of the church was replaced with a fair-faced brick building that still stands today.

For its congregants, the church and parish provided a place of worship and continuity amidst a rapidly changing city. Nestled in the heart of downtown Yangon, the small property stood relatively unchanging as bustling cinemas, busy bazaars, famous bookstores, and eventually hotels and shopping centers sprung up around it. While the church itself is not included in any public YCDC or Yangon Heritage Trust (YHT) lists for ancient or heritage buildings, the importance of the church buildings become relevant when considered in the context of the historical and social significance in the neighborhood and local community.

As time marched on and Yangon transformed, the church and parsonage began to show its age. While the church building received a facelift in 1935, the parsonage had remained untouched since its construction 10 years prior. Accumulation of storm water from Yangon’s harsh monsoons and poor soil conditions had led to significant cracks to the brick walls, weakening of the building’s foundations, and weathering of roof timbers and tiles. The roof of the parsonage building, especially, had suffered from significant damage and would require extensive repair.

When the Yoma Central team, led by Charles Kinnear, took on the project of restoring the property, they found that both buildings were in considerable disrepair. As a Corporate Social Responsibility undertaking and a sign of placing value on its neighborhood and social sustainability, the Yoma Central team had extended an offer to do remedial works on the church compounds. Initially, the plan was to tidy up the overgrowth of the gardens, painting and roof repair for the church building. Upon seeing the extent of the damage to the historically significant landmark, the Yoma Central team decided to expand the scope of work to include more extensive repairs.

Charles and the Yoma Central team found an involved and engaged church community that was eager to have a voice in the goings on at their beloved temple. Aunty Jane, whose father was the pastor at the church through the ‘70s, lived on the church property and acted as secretary of the church committee. Charles and Aunty Jane worked together closely over the course of the project, and jointly built trust between the construction team and the church community.

What started out as a simple neighbourly gesture became a large project. Charles commented that while the restoration for the church and parsonage itself was no different than other projects the team had undertaken, the foundation repair and reinforcement was very tricky and posed quite a challenge. The foundation under the main church building was in a very poor state, and it took months to find contractors who had the skills to conduct the repairs to stabilize the foundation. The works were then delayed by the COVID-19 outbreak, and then the onset of the monsoon rains.

The church community itself was concerned with maintaining the integrity of the original building, and the Yoma Central team made sure to honor the building’s heritage. The goal was to repair rather than replace whenever possible and preserve the layers of history of the building to recognize the significant elements from different eras. They made sure to use restoration methods compatible with the historicity of the building and created customised solutions for the present-day requirements of the church’s daily function to the parishioners.

Now, thanks to the expert work of the restoration team, the church, with proper maintenance and care, may yet survive another century or more to serve its community. The parsonage, will now be used to house visiting church members from overseas. “Nobody actually remembers it looking that good before,” said Charles, “It may raise the economy of the church now that it’s nicely revitalised and sound.”

When asked to reflect on the project, Charles commented, “I find with restoration work, there’s always new challenges to think about. It is challenging mixing experience, knowledge of new and old technologies and a bit of an artistic eye, but I find it very rewarding… it’s nice when it’s done. Gradually, people are going to learn to appreciate old buildings more.” Khin Sandy Linn is happy about the work being done to beautify the downtown she grew up in as well, “Significant heritage buildings should be valued and taken care of, and it is good that there is now more awareness of their value. As a downtown resident, I am proud of what Yoma is doing.” Yoma Central is working together with communities to keep Yangon relevant and special on international scale.

‘The church is our patient neighbour at Yoma Central. We are also proud to be restoring the historic landmark as a CSR project.’ Said Stephen Purvis – Head of Yoma Land – at the agreement signing meeting on 9 November between St.Gabriel’s Church Union and MDL.